A Day in the Life of Osprey F54

Page Contents show
1 A Day in the Life of Osprey F54
2 Tracking banded birds to learn their backstories.
2.1 Observing Osprey F54 on Bonaire during fall migration.
3 Tracking down Osprey F54.
3.1 Utilizing a bird network.
3.2 The backstory of Osprey F54.
4 Continued research is imperative for conservation and preservation efforts.
4.1 Research goals of the banded Osprey project of the Rush Lab.
4.1.1 Project area.
4.1.2 Project goals.
4.1.3 Additional insight and information gathered.
5 About Ospreys.
6 Lessons learned from Osprey F54.
6.1 Ensure you are a part of a birding network.
6.2 Document your observations with images, if possible.
7 Will Osprey F54 be a “snowbird” or a “tourist?”
7.1 Osprey

It’s that favorite time of year, fall migration!  This is when those of us birding on Bonaire begin to see the arrival of many migratory species, and one of those is the majestic Osprey.  Although we do observe Ospreys year-round, the population greatly increases during fall migration and over the winter months.

Many of the Ospreys that overwinter on Bonaire have a highly refined site fidelity, actually returning to the same tree limb, or other favorite perch, each and every winter.  Other arriving Ospreys will find Bonaire to be “first land” on a southern journey and will rest and recover from a long flight across the Caribbean Sea, before continuing southward to overwintering grounds in South America.

On September 12, 2022, I was birding down in the southern salt flats of Bonaire.  Along the way to the southern point, I noticed that one Osprey had just arrived and was perched on its favorite hunting tree.  As I continued south to Willemstoren Lighthouse, I espied a second Osprey perched on a post.  Taking the photo op the bird provided, I snapped off several images.  However, it wasn’t until I looked at the images the following day, that I noticed this Osprey wore two bands.

One was a color band and was mostly readable.  The number 54 was clearly discernible, but a toe partially obscured the initial letter on the band; it appeared to be an F.  Unfortunately, the second band was not readable in my images, so I began my Internet search for registries of banded Osprey to see if I could find information about this particular individual using the information I had.

I came up empty, and my efforts fell flat. 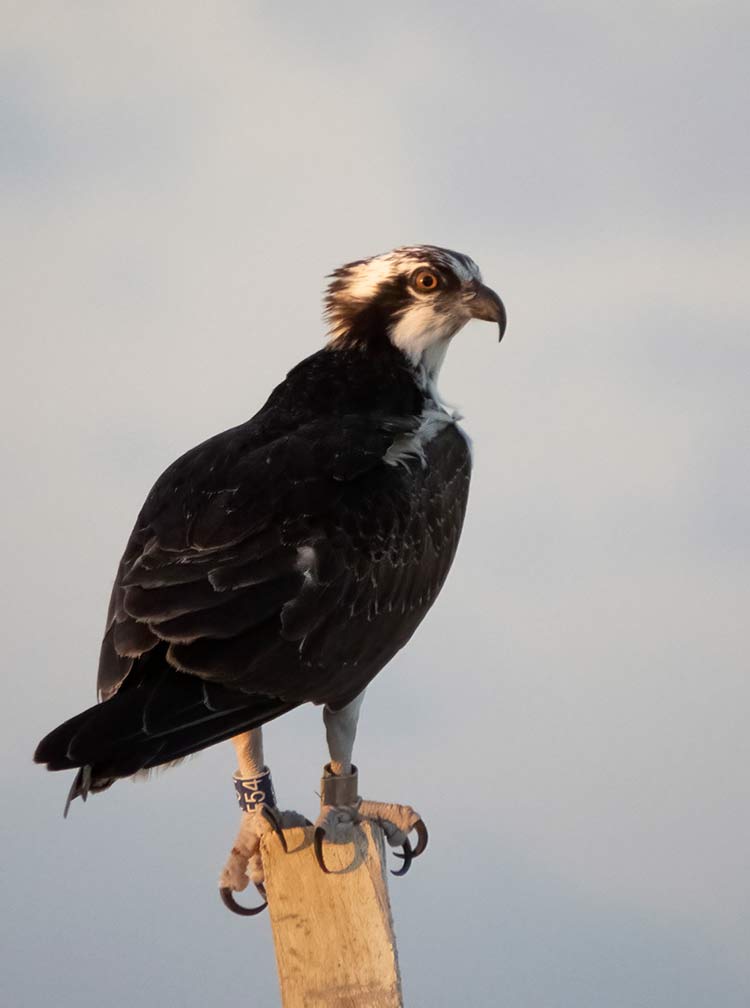 Every birder needs to be part of a bird network.  Since there is just so much to learn about our feathered friends, it’s impossible to know everything.  A birder needs to have a support network–somewhere he or she may go with questions, and, for me, there is no better bird network than BirdsCaribbean.

When my initial Internet searches didn’t supply assistance, I turned instead to my bird network.  Within two hours, I learned that Dr. Scott Rush, Associate Professor of Wildlife Ecology and Management, Mississippi State University, was mentoring a Ph.D. research assistant who was banding Ospreys as part of her doctorate program.

And so, now in touch with Natasha Murphy, I learned the backstory of Osprey F54.

The backstory of Osprey F54.

Natasha was able to provide me with the who-what-where-when details I sought.  After all, finding a banded bird makes it an individual–it is no longer an anonymous bird among many other anonymous birds.  I was curious about this individual and enjoyed learning its backstory.

Natasha and her technician, Sage Dale, along with help from the Tennesse Valley Authority (TVA) and USDA personnel, banded Osprey F54 and his sister, F55, at Guntersville Lake (lat/long: 34.659337, – 85.944116) in Alabama.  Osprey F54’s nest was on a navigational day marker in Jones Bar, on Guntersville Reservoir.  At the time of banding, Osprey F54 weighed 1120 grams (approximately 2.5 pounds), and blood was drawn for research purposes, but it also provided DNA-sexing:  Osprey F54 was a male.  That day, Natasha and Sage banded 30 Osprey chicks in the area,  including a nearby nest with chicks F50 through F53. 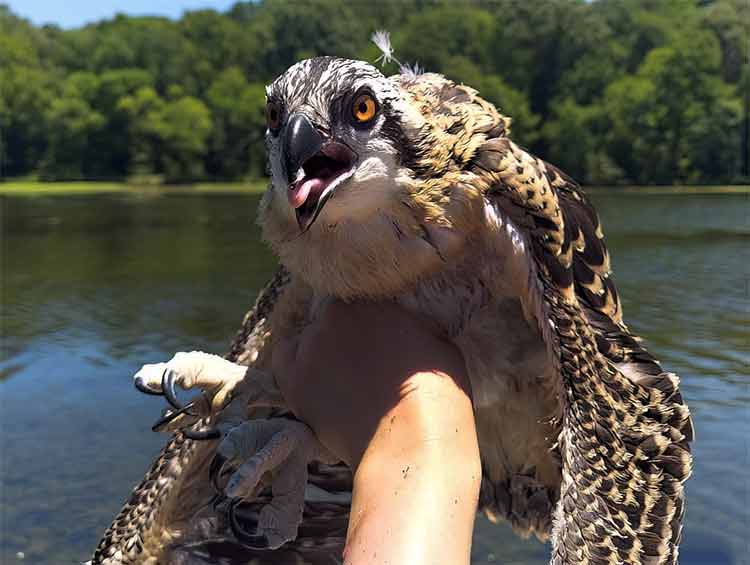 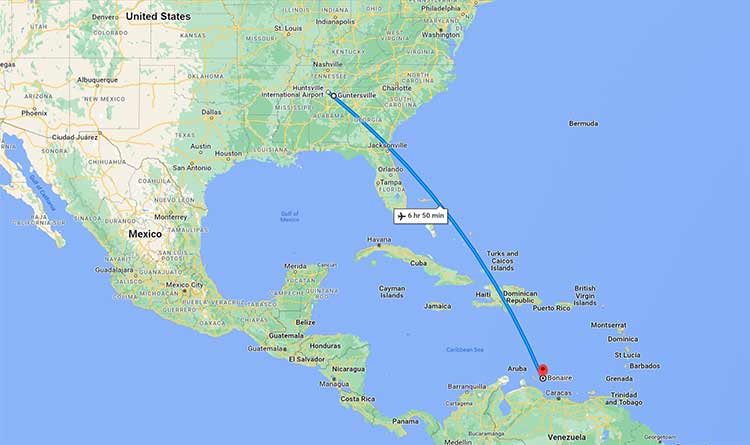 Less than three months later, this Osprey was sighted here on Bonaire, a distance of over 3,000 kilometers, or about 1,900 miles.  It would take nearly seven hours in a plane to make that trip, what we humans might consider a long flight, yet this young Osprey made an equivalent trip and arrived in Bonaire looking healthy and fit after his long flight.

With the information garnered from Dr. Rush and Natasha Murphy, his research assistant, I was able to report banded Osprey F54 to the Bird Banding Laboratory at the U.S. Geological Survey, Eastern Ecological Science Center.  Each reported sighting adds a data point to this individual’s history and will provide further insight as to his movements and migrations.

Continued research is imperative for conservation and preservation efforts.

The world’s birds need us now more than ever.  Recent studies have shown that an alarming number of birds have declining populations.  Research projects, such as Natasha Murphy’s, provide insight and knowledge, allowing for better-managed conservation and preservation efforts.

Research goals of the banded Osprey project of the Rush Lab.

The banding efforts of this current research project stretch across the entire TVA service area, including Mississippi, Alabama, Kentucky, and Tennessee.

The goal of this specific Osprey research study is to better understand the interactions of Osprey with human infrastructure, particularly associated with utility transmission, since many build nests on and roost on human-made constructions.

Tracking the site fidelity of nest areas, and how these colonies form over time, will provide needed data on how best we humans can assist Ospreys.

Besides DNA-sexing, the blood samples drawn from each chick will help Natasha explore relatedness between individuals, and also within populations, which will provide additional information on nesting site fidelity and colony dynamics. 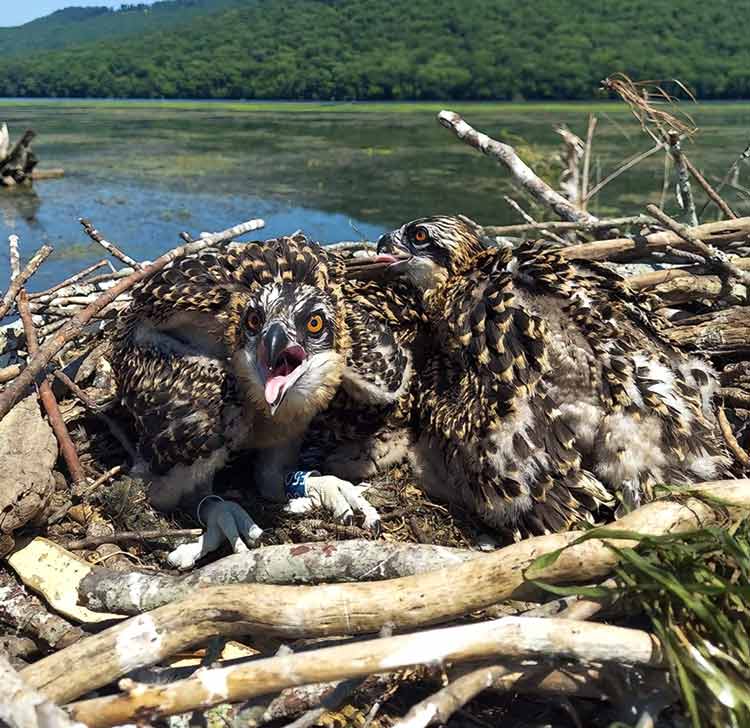 Sometimes such research projects provide unintended, yet welcome, information.  This was the case just recently when Hurricane Ian traipsed over Cuba on its way to central Florida.  Interestingly, an Osprey that Natasha tagged this past summer was migrating south through Florida and was in east-central Cuba at the time Hurricane Ian passed over the island.  Although the storm system caused severe damage, this bird, outfitted with telemetry tracking, still appeared to be making foraging bouts, moving a few kilometers (about a mile) within a defined area over the days of the storm.  This Osprey must have really hunkered down, as the winds whipped around it.

But research is not always done under pleasant conditions.  Sometimes, researchers need to ascertain populations of species after a devastating storm has passed.  Dr. Rush had one such mission himself, checking on marsh birds after a tropical weather system passed. It makes for interesting reading:  Scientists at Work, Sloshing Through the Marshes to See How Birds Survive Hurricanes.

The Osprey (Pandion haliaetus) holds allure for many bird enthusiasts.  Its hunting behavior of plunge-diving for live fish, and then carrying its catch off to a perch to dine upon, catches our attention.

An Osprey visiting Bonaire for either a short resting stay or for complete overwintering can conceivably fly more than 200,000 kilometers (125,000 miles) over its lifespan of 15 to 20 years.

An unbelievable 90-95% of Osprey breeding pairs now choose artificially man-made structures, such as channel markers in harbors and other waterways, but towers used for radio, cell phone, or utility lines also can be favorite nesting sites, as well as platforms which have been erected just for their use.  Predation, loss of trees, and development of shorelines are likely reasons that Ospreys have changed their nesting locations, so Natasha Murphy’s research project is timely and needed.

Each time I go out in the field, the birds teach me something new…..perhaps I identify a new foraging technique I’ve never observed before…..perhaps I hear a new vocalization…..but the lessons which Osprey F54 taught me were much more practical.

Ensure you are a part of a birding network.

Knowledge and information can only add to the enjoyment of your birding experiences.  In the case of Osprey F54, I would never have been able to find out the bird’s backstory, and thus greatly increase the pleasure of the observation, without the assistance of a birding network.  Find birders in your area with similar interests, and discuss your observations.  A wonderful example of the importance of bird networking is illustrated here:  The Value of Networking.

Document your observations with images, if possible.

It really doesn’t matter if you are using a point-and-shoot camera, as I do, or if you have the best system today’s technology can provide.  The point is to document your observations with images.  Sometimes we only get a brief glimpse of a bird, and we don’t have time to take in all the details, such as bands.  Even if we identify the bands, we might not have the luxury of time with the bird to be able to read them.  By taking images, you have a record and can review them for additional details you might not have discerned in the field.

Will Osprey F54 join the ranks of the many human “snowbirds” who fly to Bonaire to spend the winter?  It’s his first migration, and perhaps he will decide he likes Bonaire, and, as many other overwintering Ospreys, we’ll see him back year after year.

Or, will Osprey F54 be a “tourist” who visits for a week or two for some rest and relaxation, before moving onward?

Only time will tell!  However, I shall be on the lookout for Osprey F54!  If you are on Bonaire and see Osprey F54 yourself, please let me know!

(Images and video courtesy of The Rush Lab at Mississippi State University and the author.) 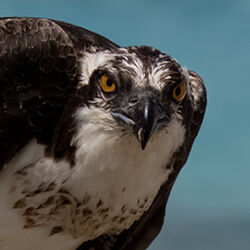 Breeding: Lays two to four eggs in a nest constructed of sticks located high on utility poles or trees.

Big White Birds on Bonaire--How to Identify Them!

Sign up to receive notifications when a new article is posted.

Susan has been living on Bonaire for over 30 years. She is a certified bird guide, as well as a topside and underwater photographer. She is a 2016 graduate of the Caribbean Birding Trail Interpretive Guide Course conducted by BirdsCaribbean.

Reach out to Susan

Contact Susan via email, Facebook Messenger, give Susan a call, or simply use the online form below.

If you have any questions in regard to your birding tour on Bonaire, feel free to contact Susan to get answers.  She is always happy to elaborate on routes or best times for a tour based upon your own personal preferences.  Tours can be tailored to your own interests, whether that be birds, photography, or both!

It is also recommended that you do some homework about Bonaire's birds before you visit.  By knowing a little bit about the birds which might be encountered on tour, your enjoyment will be heightened!  Be sure to check out these resources for Bonaire Birding. Reading the Bonaire Bird Blog will also accustom you to the birds that habitually are encountered on Bonaire.

Get in touch with Susan to check availability for the dates you are visiting Bonaire.